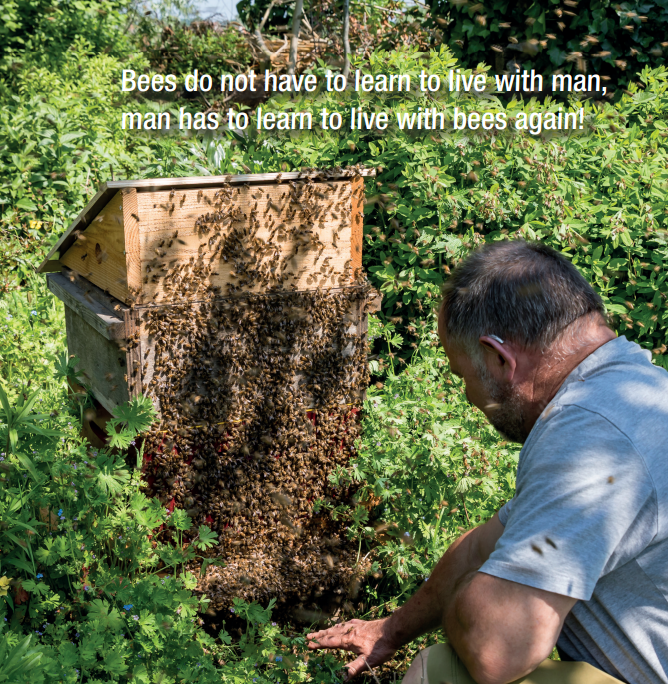 Beekeeping according to Geert Steelant

According to Geert, beekeeping must be kept simple and it is important to follow the nature of the bees. Too much human intervention and complicated working methods make it more difficult for the bees. Bees are extremely sensitive to stress factors and these are often strongly present in traditional beekeeping. To name just a few: the use of a varroa grid, queen excluders, smoke, replacing the honey stores with sugar for winter, opening and checking the hive too often, etc. Geert is convinced that being able to think like a bee and feel what they may or may not like is very important and a required quality of a beekeeper.

Using Warré hives you get as close to the natural habitat of the bees as possible. Using medicines or different acids to fight the varroa mite is something Geert can’t understand knowing that it is also possible to use a natural enemy of the varroa mite instead. On the internet, Geert bumped into a video made by British researchers who filmed a bee population living in the wild. To his big surprise, Geert saw predatory mites running on the comb. Something that the makers of the film had not noticed. This was the best proof for Geert that these predatory mites also have a function within a hive in the wild.

While many beekeepers try to prevent the swarming of their colonies, Geert loves it when his number of colonies multiply in this natural way. When it comes to the honey harvest, Geert first examines how much honey his hives need to survive themselves. He will only harvest the honey if they have too much. Processing the honey happens with full dedication using the home-made honey press. Whatever Geert does to his bees, his first thoughts always go to what is best for them. To Geert beekeeping is no longer a leisure activity, it has become a way of life.

Because bees are suffering in this world, Geert wants to pass on his knowledge to future generations. You can download the full publication through this link. Please also have a look at Geert’s personal website (www.delachendebijenkast.be) and get to know about Geert’s beekeeping method. Geert is also one of the core-members of the Belgian Natural Beekeeping Collective (www.natuurlijkimkeren.org).

Ordering predatory mites
Do you want to start with using predatory mites in your bee hives? You can easily order the Stratiolaelaps scimitus predatory mites through our webshop. We are able to ship this product to multiple countries such as Germany, Belgium, France and Austria. If you want to order it from other countries please contact us for the delivery costs and possibilities, you can send us an e-mail on: info@biobestrijding.nl
We are looking forward to hearing from you!

This website uses cookies to improve your experience while you navigate through the website. Out of these, the cookies that are categorized as necessary are stored on your browser as they are essential for the working of basic functionalities of the website. We also use third-party cookies that help us analyze and understand how you use this website. These cookies will be stored in your browser only with your consent. You also have the option to opt-out of these cookies. But opting out of some of these cookies may affect your browsing experience.
Necessary Altijd ingeschakeld
Necessary cookies are absolutely essential for the website to function properly. These cookies ensure basic functionalities and security features of the website, anonymously.
Functional
Functional cookies help to perform certain functionalities like sharing the content of the website on social media platforms, collect feedbacks, and other third-party features.
Performance
Performance cookies are used to understand and analyze the key performance indexes of the website which helps in delivering a better user experience for the visitors.
Analytics
Analytical cookies are used to understand how visitors interact with the website. These cookies help provide information on metrics the number of visitors, bounce rate, traffic source, etc.
Advertisement
Advertisement cookies are used to provide visitors with relevant ads and marketing campaigns. These cookies track visitors across websites and collect information to provide customized ads.
Others
Other uncategorized cookies are those that are being analyzed and have not been classified into a category as yet.
OPSLAAN & ACCEPTEREN